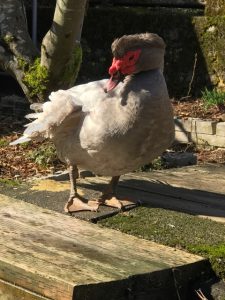 Master of his domain

“Oh m’god, what is THAT?!” This is the reaction of most folks who meet The Duck of Earl for the first time. One friend mistook him for a large, concrete garden sculpture, until he moved. A few have been surprised to find him standing suddenly behind them, making a noise like those raptors in Jurassic Park.

I’d like to share Earl with you, because he deserves his very own story. In the few weeks he’s been with us, he has shown himself to be a real character. Not a day goes by without hubby Carter or I telling each other, “Gads, did you see what Earl did today?” Because he is always doing something.

Duck of Earl is a young, huge muscovy drake. He came along as a “bonus” to the nine fertile duck eggs his owner gave me for our duck Lucy to brood…

“Do you want this drake?” Ty asked us. “I don’t have room for him, but we like him too much to give him to someone who will just turn him into dinner.”  I said sure. I’m not surprised there are folks who would love to eat him. He would fill up a turkey platter. I’ve never seen a duck so big. 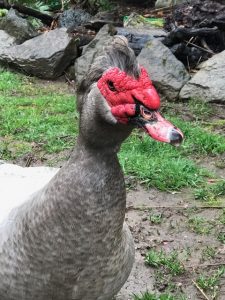 Earl and nine fertile eggs came home to MillHaven about a month ago. His first introduction to Bella went smoothly. She was there to welcome him out of his cat carrier, in which he was stuffed tight as sausage. When he emerged in all his pooped-on, gray glory, Bella fairly swooned. She put her bill up toward the sky and made soft little chirping noises. Muscovies are quackless ducks, and the females have the sweetest voices. Earl answered in typical male muscovy fashion with a raspy hiss ending in a gravely “chortle-chortle-chortle.”

“Gads, he sounds like a dinosaur,” said Carter. Bella quickly turned her back on him and politely dropped onto the ground. Earl didn’t need a second invitation. He was atop her fast, shoving her face into the ground. Duck mating is not a pretty sight. There is much head pecking, feather pulling, and mud. Then, there is this scary, bright orange corkscrew penis that suddenly appears from out of nowhere, and wiggles all over the place while the drake continues stomping on the back of his beloved like the RiverDance cloggers on a wooden stage.

“Shit…” said Carter. “He sure doesn’t waste any time…” I stood by, averting my eyes to the debauchery, waiting for it to be over. Earl continued his pubescent bumbling while Bella lay perfectly still. When the deed was consummated, Earl promptly rolled off and with a long hiss, he flopped onto his side, pulling that scary penis with him, and just laid there, exhausted.

Bella jumped up, wiggled her tail in ducky delight, and began preening her utterly unkempt feathers. Her pretty white face was covered in dirt. She was missing a chunk of feathers near her eye. She looked pleased as punch and secretly I knew that she was more than ready to go at it again. Now.

But it was going to take Earl some recovery time. For the rest of the afternoon, he followed her around like the new kid at school as she lead him around the yard, chatting to him all the while. She showed him the comfrey plants, the ferns, the compost bin, and—her favorite!—the plastic kiddie wading pool.

She showed him how to get into the pool from atop the cement block, and soon they were both flapping wildly in the water. When they left the pool, I saw Earl had displaced half the water.

I knew that we would have two issues with Earl that would need to be resolved so that our Eden could remain calm. First, Earl would need to prove himself a gentle suitor (some drakes are bigger cads than others), and—more urgent—he would need to learn to put himself to bed in the duck coop at night. We have many night visitors in our yard, and all would be delighted with a fresh duck dinner.

At nightfall, I headed outside to see if by some miracle, Lucy and Bella had managed to coax their new boy-toy into the boudoir. No such luck. In the twilight, I could see him perched on one foot atop the cinderblock pond stair. And what a foot it was: platter sized and greenish, with wicked-looking claws.

“Okay, Earl,” I said. “It’s time for you to retire for the evening with the ladies. You can’t stay out. It’s just not safe.” I moved toward him with my hands out, making a shooing motion in the direction of the coop. Earl was supremely disinterested. He acknowledged my presence with a wag of his ample tail. I moved closer. His head crest sprung up into full glory. Muscovies have these Mohawks they raise and lower. But Earl’s “do” was nothing like those on the girls.  His crest had waves in it, like Elvis Presley. he ramped it up and down a few times, so that I got the full-on effect.

But Earl didn’t budge. He bobbed his head up and down a few times. As I moved closer, he extended his neck: “Hisssssssss chortle-chortle-chortle” he said. Undeterred, I pushed forward. Finally, and with a great sigh of defeat, Earl stepped off the cinder block. I could literally hear the sound of his big feet smack onto the ground.

The red blobbiness is called carunkeling. Earl’s is exceptionally attractive. At least, it is to our other ducks.

Over many years of bird and beast wrangling, I’ve learned how to use my arms as flags, to steer confused critters down the right path. Earl was not stupid, and he plainly got what I was up to. Slowly, he eased himself toward the coop, ducking his big head to step inside. A couple of flips of the fasteners and the ducks were all safe and sound for the night.

It only took Lucy and Bella one night to learn the “go-to-bed” routine. The second night after they came home with me four years ago, I went outside to herd them indoors, but they were already sleeping in the straw with their bills beneath their wings. I expected the same from Earl, but it seems that he is a night owl. Most nights, I find him there on one leg at the pond’s edge, watching the stars, sipping pond water.

I chose muscovy ducks for my yard because they are more terrestrial ducks, interested in bugs more than water plants or any plants. Left to their own, they prefer to roost in trees and are very strong fliers. They are the only ducks not related to mallards. Actually, they are more closely related to geese. The are very quiet and very calm.

Bella and Lucy are about a third the size of Earl. Their feet do not squash tender plants. They nibble along on the grass and leave most other plants alone, except for the hostas, which they adore.

As Earl settled into his new reign in the yard, I realized quickly that simply by virtue of his size, the plants were going to suffer. He’s squashed quite a few, but they seem to be bouncing back.

While Lucy sat brooding her eggs, Bella and Earl made the rounds of the yard for the next month. Then, Lucy hatched out one lone duckling. The rest of the eggs were bad. Lucy had never been a mother before, and I know that drakes can sometimes be hard on ducklings. So I moved Lucy and Baby Ducky over to my next door neighbor’s yard, which has worked out great.

But just as Lucy was being relocated, Bella started sitting on her own clutch of eggs. Overnight, Earl was a bachelor. With no girlfriend to occupy his time, he has taken to following us at a distance as we work in the yard. Many times a day I’ll discover him behind me, hearing his hisss-chortle before I see him.

“Howdy Earl!” I’ll reply. He’ll watch me with his head cocked, his Elvis Mohawk popping up and down. The other day, he came beside me while I was weeding. “You know, Earl,” I said, “You’ve been hard on the plants. Could you please watch where you step with those big feet?” 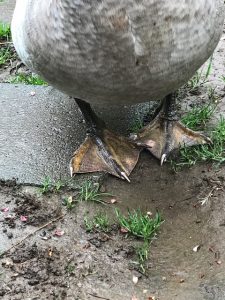 He eyed me quizzically, then bent his head and began snapping off the fiddle heads on a nearby fern, his eye on me the whole time. To be sure I got his point, he turned his back to me and let go with a projectile blast of poop. If you are not familiar with ducks, you would not know that ducks have elevated bowel noise to a new level. You can hear them poop from clear across the yard. It’s like that sound that little kids make when they want to sound particularly offensive, with their tongues out and their lips flapping.

“Thank you for that, Earl,” I said as he continued to eat off the heads of my fern.

There are some animals that just make you laugh. Earl is one of those. He is both majestic and goofy at the same time. Like if you combined the Pope and the Three Stooges. In these days of political unrest and too-regular world catastrophes of one sort or another, I would wish everyone an Earl for their yard. We all could use a good laugh or two.

So I send this little note off into the universe with a big thank you to a very big duck who manages to keep a smile on my face. May you all be graced with exactly the “Earl” you need.

This entry was posted in Animal Family and tagged ducks, gratitude, Nature and Spirituality. Bookmark the permalink.

4 Responses to Duck of Earl