NOTE: For some reason, FB will not allow me onto its site anymore. This may be a glitch of some kind or it might be a message from the Universe, but I’ve decided this: I’ll do my best to get back onto FB, mostly so I can tell everyone I’ll be leaving. I’m setting up a MeWe page for myself and wen it is ready, I can aim you there if you would like to follow me and keep up our conversations. Meanwhile, I’ll be communicating more with my blog, so be sure to sign up here for new posts.

Today, I’d like to share some surprises and little miracles with my healing journey, in the hopes that there is something in here that may help you in your own healing. Because we are either in the process of healing, or in the process of decay. It is that simple. You either lift yourself into healing, or you abandon yourself to the pit where you sit and suffer and wonder why. But the motion forward never stops, so it will carry you either up, or down. Your choice. Ouch, yes, but your choice. 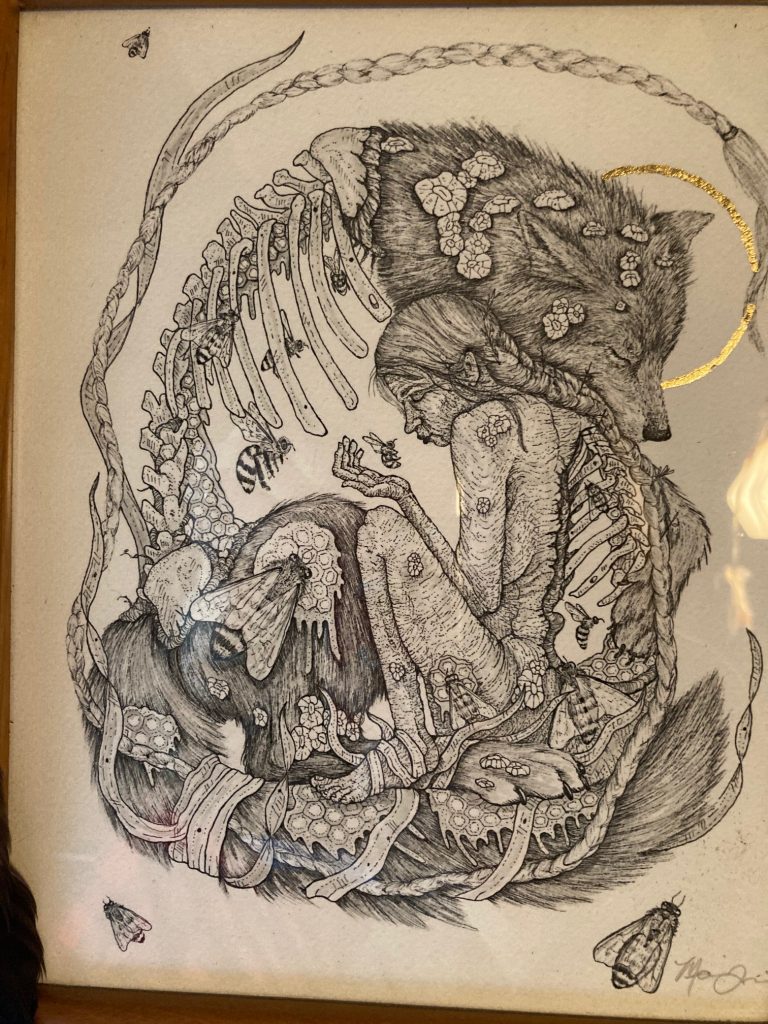 Perhaps many of you saw this on my FB page. I purchased the print from marissaquinn-art.com. I felt that the print was a part of me. The old crone with the long braid, graced by bees. After the print arrived, I noticed the paw of the wolf wrapped gently about the woman’s kidneys, and how a bee floats inside the woman’s kidney area, bringing healing.It is a powerful piece of art I will be reflecting with for a long time.

Those of you who have read my post on Starvation know of the journey I’ve been on. Recently, only about two months ago now, I found a new doctor. She is an internist, but also steeped in alternative medicine. And she jumped on board my case with the kind of energy that I simply don’t have right now. She contacted all my other specialists, and have now turned hem into a “team” that share my information back and forth.

My other physician never did any of this. I assumed for the past decade that this is simply the way things are done. Well, it is not. So, here’s my first remembrance about medical care that I once knew , but that had skipped my mind: Get rid of doctors who are  not listening to you, and not working hard for you.

I’ve had trouble for years finding a good, compatible doctor for myself. I always used to comb their online profiles, and select from there. It never worked. So, this time, I went to the doctor I like and trust most, Dr. Jason, and I asked him for a recommendation. I figured that I liked him, we could communicate, I loved the depth of his medical care, and I figured that any doctor he would like, I would, too.

It worked. He suggested an internist he’d gone to school with and said, “I think you would like her.” I saw her three days later, and from that moment, my healing from starvation began. Her first “assignment” was for me to eat every two hours, whatever fattening stuff I could get down, plus she prescribed me a pill to help my constricted stomach open a bit.

She suggested Essential Oils to rub on my belly. She “prescribed” cranial sacral treatments to help soothe my hyper-activated nervous system. At first, all the changes in my schedule were overwhelming: when to take he laxatives and collagen to help my paralyzed gut, how to get in so much food so often, when to fit in my medications and herbs. 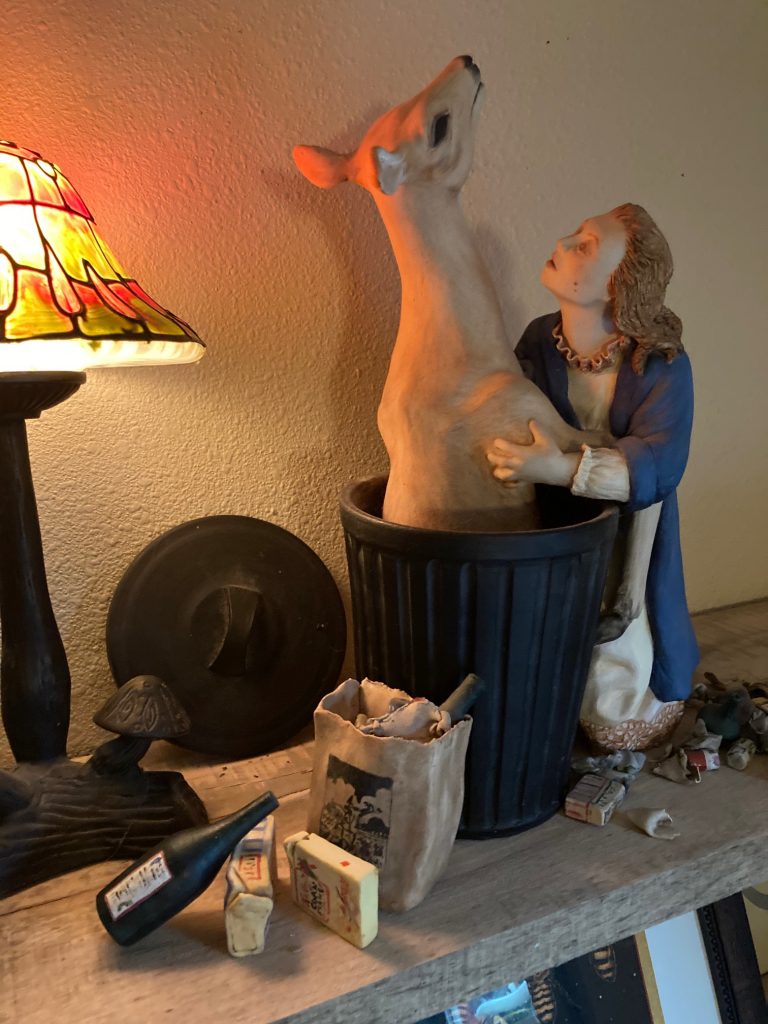 This sculpture– given me by a dear friend and probably worth far more than our house–has deeply personal meaning to me. I believe the true name of the piece is “Reclamation.” I’ve renamed it “Rise Up,” because those are the words that come to me each time I look at it. She sits at the foot of my bed on a shelf, so I can ponder her daily. I see this strong, amazed woman, throwing away all the garbage to reach in and pull out of the depths the love, life, power, femininity, and resolution of the doe. “Rise up” I say to myself each morning.

Eating was hell. But I pushed it anyhow, not minding the nutrition or lack of it in the food but only the calories. I was living on protein drinks, whipping cream, cream cheese and avocado, mac and cheese, melted coconut oil, soups, stews.

I made a list for myself for each hour of the day: when to take what, when I could rest. Somehow through all of this, I managed to continue my morning breathing exercises and my cold showers. I lived as in a trance: food, breathe, take pills, more food, rest.

But rest came hard. I could sit and do nothing, because that was all I had any energy for, but I could not nap, and I had to take a lot of medications to sleep.

Finally, my cranial sacral appointment arrived. It took nearly a month to schedule. It is a very gentle kind of massage on the head and face that is soothing and opening. After that session, I was able to take my first nap! The practitioner said, “if you have any Copaiba essential oil at home, it is like CBD for the brain. Rub a few drops in your scalp each day for clarity and rest.

Coincidence is a funny concept I’ve never believed in even though I use the word. But here today, I’ll use a term I like much better: Providence. Coincidence feels like a bit of a lucky bumble that just sort of rolled up against your foot by surprise.

Providence, on the other hand, has some heft to it. Providence does not roll in like a confused mole careening on pavement. It steps in with grace, with purpose, carried—I believe—by the force and the love of God.

So, providentially, I had Copaiba in a set of oils I’d ordered and then never learned to use. Thank you, benevolent universe!

My counselor was speaking to me the other day and we got to talking about “Highly Sensitive People,” a theory years ago, but now proven as a personality trait of perhaps 20{fe46f85cf7c5ff45e639cce4bd0b7ed47fa7c0a03ad6c7408e07815ebf6adf0a} of the population—and it affects animals and children to that same percentage. My counselor asked me to watch a movie called Sensitive: The Untold Story.

Providentially, I watched the movie that night. The moment it began, I broke apart in a muffled, stunned weeping. Many years ago, a woman had called me on the phone: “Hello, Susan? My name is Dr. Elaine Aron and I’m working on a theory for a book called “The Highly Sensitive Person.” I’m searching for people to interview, and when I read your book “Animals as Teacher and Healers” I immediately thought that you might be one. Would you consider letting me interview you?”

I am now hidden in the depths of that book she created that went on to surpass theory and is now enshrined into the trusted realms of researched science. In these intervening years, many other doctors stepped aboard to study the habits and special gifts and challenges of we “HSPs” as we are referred to. We have many of both, and much to offer the world.

And the biggest gift is to know we are not odd or wrong or ill. We just have a brain that takes in all the world—all of it—and works to make some sense of it in very particular ways. We are creatives. We get excited and at times overly passionate. We “know” things, but have no idea how we know them.

So, now, this little movie has launched me into a greater appreciation for my life-long feeling of being “different.” For decades, I’d been taught that being different meant there was something wrong with you. Now, I know that this sensitivity is actually my superpower. Somehow, my life had launched me years ago into forgetting this memory of Dr. Aron and my part of the beginning of the exploration of highly sensitive people. But now, providence has restored that memory to me.

I’ve also started seeing an acupuncturist, who suggested a nutritional counselor to me whom I called just yesterday. She is a high-energy, kind, passionate woman who listened to my story of starving and now trying to return to food other than fat bombs.

Oddly, while I have been gaining a bit of weight (I’m up to 116.5 from a low of 103), I feel more tired than ever, and my weakness is stunning. It is hard for me to pick up a gallon of milk, or to pull off a cardboard container from a package). Jennifer explained to me that because my body had shut down so deeply into starvation, it takes the body a long time and tremendous energy to “restart” the gut. She described what had happened to my gut was like a stroke, and it was having to learn all over again about how to digest food. 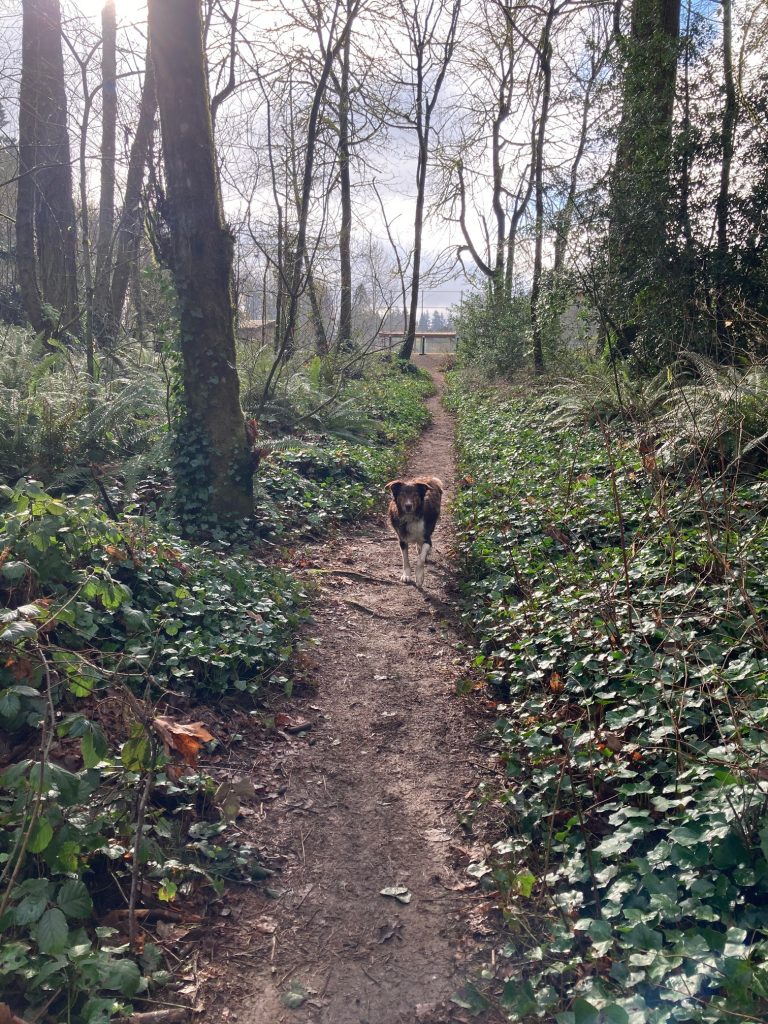 I walk slowly these days, but Carter is patient…

She explained that the energy it took the body to relearn how to process food is staggering, and told me not to fear my exhaustion—that it is very normal. Then, she said, “The pineal gland is the one charged with resetting the nervous system when it goes whacky.”

As providence would have it, two weeks ago while looking through my list of youtube videos on Wim Hof breathing techniques (read previous post), I found this one video of breathing and special sound frequencies especially crafted to open and heal the—yes, you guessed it—pineal gland.

Again, it was jaw-dropping time for me. Honestly, my jaw is so often on the floor these days I’m surprised I still have an intact chin.

I remain mystified how this providence works. Is this my inner guidance joining the hand of the Beloved—sort of the “God helps those who help themselves” notion? So, together as one, miracles happen? Or is this my own inner power pulling this help my way because I’ve refused to stop trying?

I’m inclined to think divine intervention is at the heart of it, because that idea makes me feel happy and more whole. I am listening now like never before in my life to the guidance, the providence. So when a strong mental voice reached out into my mind this morning and said, “You will be a teacher for the rest of your life,” I answered aloud, “Yes. Yes. I commit to this. I promise this.”

7 Responses to Coincidence or Providence