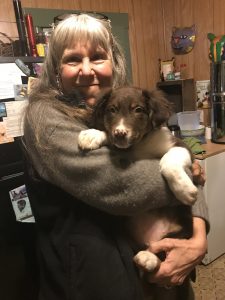 The bare trees clatter their branches together in the strong east winds on this chilly morning. Gone now are the whispered conversations of leaves, the soft hiss of green grasses bending in a summer breeze.

I always keep a handkerchief in my pocket now for when my nose starts dripping from the cold. I set my plans for the winter season almost two months ago, finishing up the last of my summer projects of bees and swarms, flowers and watering, weeding and composting.

The Eden of my backyard is a bit tattered-looking now, the tall grass heads and stands of asters, coneflowers, and black-eyed Susans scrapping their dried brown seed heads together while flocks of tiny birds hop about beneath them. For the birds and the insects, I’ve left pretty much everything standing this winter. I’ll do clean up in the spring when the seeds have fallen, the insects nesting in hollow stems have departed, and the birds have had their fill…

With the last of the garden chores done, I wiped my muddy hands on my pants and turned my mind to winter dreaming. My agenda for this winter, is pretty straightforward: write, write, and write some more. Then, a few classes to teach.

Winter is that goes-within season that some treasure and some do their best to avoid. For myself, I love the cold season as it is the only thing that can keep me indoors anymore, and at my writing table. Naturally introverted and intensely introspective, I treasure the long nights, the hot tea, the baking bread, and the deep quiet.

So, what in the world was I doing last Tuesday in a car in the pouring rain, driving three hours south with Hubby John to go look at a puppy? “We must be nuts,” I said to John as rain sheeted across the windshield and pounded like marbles on the roof of the car. 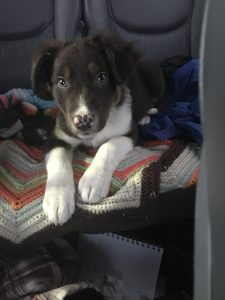 “Well…we’ll just have a look,” he said. We’d both been talking for nearly a year about bringing a new pup home. Mazel will be eleven this year. In our mid-to-late 60s now, we figure it will be the last chance we have to raise one more pup. But even after we’d decided it was something we wanted to do, it always got pushed to the back burner.

So I was as surprised as anyone to find myself searching for puppies on Craigslist, and even more surprised to find one listing jumping out at me: “Catahoula-Aussie mix pups. Two left.” In a trance, I watched myself call the owner, talk to John, and barrel out the door to drive south and see the pups. A three-hour drive used to be nothing to me. Used to…

So, with storms and showers following us all through Southern Oregon, we slid into Todd’s driveway in the late afternoon. I left the decision to John, and John chose the red pup, who Todd’s kids had named “Vortex.”

In no time at all, we were turned around, headed home with Mazel Tov and “Vortex” in the rear. “What have we done??” I asked John.

“I guess we’ll find out…” he answered. Mazel pulled himself upright against the far corner of the seat, nose in the air, as though his seat-mate smelled vile. The little red puppy sat quietly in the center, looking a bit shell-shocked. I’m sure we did, too. Neither dog made a sound for the next three hours.

That first night at home was a circus. I’d made no plans for bringing a puppy home, so we gave the pup some makeshift toys for the night: an old shoe, a torn sock, a knotted dishtowel. John set the puppy up on the recliner with him, and I headed for bed.

Buzzed from the long drive, I laid sleepless in bed a long time, looking out of the darkened windows, wondering what in the world had compelled me to act so impulsively. Dinky, my living bed-warmer, wondered, too. Winter is the time for quiet and going within. But I had suddenly turned the season on its head.

What would happen to my writing time? Would there be any more long, quiet days? What about silent reveries with tea and books?

I was up at six the next morning, mopping up pee puddles and tossing together a small breakfast of yogurt, sweet potatoes, and a handful of Mazel’s dried kibble. We dropped the name “Vortex” and decided to call the little red guy “Pup” til his true name became clear to us.

Mazel was still behaving as though we’d brought home some nasty, smelly thing. He growled when Pup neared his bed, or tried to tug on his tail. But Pup was a mannerly fellow who listened well and acted accordingly. He honored the boundary lines Mazel set. 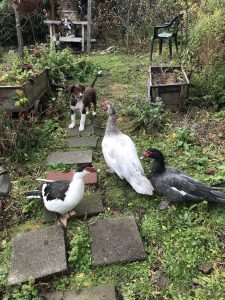 Dinky was willing to sniff noses with the new guy. When I took Pup outside, he met the muscovy family with great trepidation, backing up so fast he fell onto his bottom. Earl, our drake, hissed. The ladies, Blackie and Bella raised their mohawks and spread their wings. Blackie waddled forward and gave Pup a bop on the nose with her bill. Just because.

Pup circled behind my legs. He had decided quickly where safety could be found in this very strange new world. We headed back to the house and before we got there, Pup squatted and pooped—a loose, wet stream.

By evening, I had learned a good deal about our new family member. Although I still had not determined what in the world had so compelled me to bring this particular pup home. I think I felt much as he did that day: confused, concerned, and lost in some odd parallel universe.

We sorted through names all day, eventually settling on Carter, which is John’s mother’s maiden name, and John’s middle name. I’ve always loved that name, and loved the very sound of it. It seems to me a stout-hearted name, a manly name, a strong name. Just as the little pup was quickly proving himself to be.

Anytime a new creature comes into our home, I spend a great deal of time observing. It is my habit with my bees, and it has become my habit with everything else as well, and it is a darn good habit. I noticed how quickly Carter learned to follow us when we were outside. How fast he understood “sit,” and to do so whenever I showed him his food bowl.

I watched Carter learn quickly not to fight the doggy gates we set up across kitchen and living room, and to sit and wait patiently for us to return to the room. I learned that he loved to be held, and would sit happily in a lap for as long as he was welcomed.

All this adjusting seemed to come easily to him. “He is a strong dog,” I told John. “He is grounded and very confident in his skin.” Carter looked up into my face and barked a quick “Yes!”

But, alas, his tummy was not adjusting as well as the rest of him. The runny poops continued all day. By night, I was headed to the vet, afraid. The technicians met me in the parking lot, dressed in Eboloa-styled garb. “In case he has Parvo…” they said. 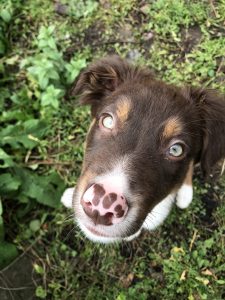 As we waited in the exam room, I held Carter tightly in my lap. He looked into my face with his remarkable yellow wolf eyes, and licked my nose. And let’s spend just a moment to talk about noses. Carter has a unique one, pink and black spotted, as though his mother pawed him on the nose and left her smudged print.

I kissed his cool, wet nose and whispered, “You have to be okay.” Because I knew something else about him then. Even in my tranced-out, overwhelmed state, I knew looking into those startling gold-green eyes that I had stumbled across a small wonder. “You know, I’m really surprised that he is still here,” Todd had said when we came to see the pups. “Vortex is the most striking of the puppies and I expected him to be first of the eight to go, but he’s still here.”

“You made yourself invisible, didn’t you?” I breathed into his red fur. “You waited for us. And we found you. And you have to be okay.” I kissed his head, breathing in that sweet puppy smell. He rested quietly, keeping his eyes on mine.

We were at the vets for a long time, and ultimately went home with some poop medicine, some antibiotics, and an assurance of no disease. On the way home, he started vomiting. Stress can be a hard thing. I have long suffered from psychogenesis, defined as “the development of physical disorders as a result of mental conflicts rather than from organic causes.” That is, when my mind is upset, it translates into physical symptoms.

It seems that Carter suffers from it, too. That night, he threw up twice more. For the second night in a row, I went to bed tossing and turning. But by mornings, all my prayers to “the helping spirits” were answered. Carter had turned the corner and was holding down his breakfast and lunch.

We are still in week-one of puppyville, but we are all settling in. John had a bad interaction with a saw that sent us to the ER for a whole day, but even with all this, we are finding our stride—slowly—as a new, slightly larger, family.
I will keep the spirit of winter alive, even with this new little red blizzard whirling his way through the house. And I will give myself the smallest of pats on my back for allowing my heart to take over my body and send us hurtling down through Oregon in the rain. I don’t often get such strong, inconceivable tugs down deep in my bones, and I am glad that—mostly—I listen to them.

Some winters are unseasonably warm, with occasional breaths of unexpected spring on the east winds. This winter, we will honor two seasons here at MillHaven: the season of quiet introspection and inner rest, and the spring of new beginnings that have come to us clothed in red fur.

How can it be that my soul suddenly feels big enough to juggle two seasons in one? How is it that my heart has stretched to encompass loving two dogs? 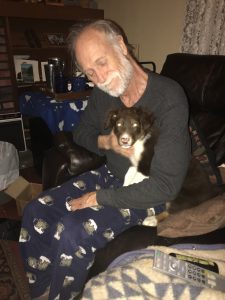 John and Carter do some male bonding.

Maybe it is my very own Christmas Miracle. Yes. That must be it.

My wish for you is that your very own Christmas Miracle tugs at you this season. And even if it seems stupid and ill-conceived to follow—follow it you do.

This entry was posted in Backyard Nature and tagged animals and healing, Dogs, new puppy. Bookmark the permalink.